Thoughts on war, occasioned by reading the book, "Conduct Under Fire," by John A. Glusman

As the son of a former American officer in WWII, as the seed of grandparents who died simply because they were Jews in Nazi-controlled territory, as someone who attempted to earn an ROTC college scholarship and failed, as a former teenager who couldn't imagine serving in the military during the Vietnam war and couldn't decide to whether to evade the military draft or not, as someone who ultimately never served in the military, I have had ample opportunity to consider the necessity of war.

Today, I have nearly completed reading, Conduct Under Fire -- Four American Doctors and Their Fight for Life as Prisoners of the Japanese, 1941 - 1945, by John. A. Glusman.

It reminded me, yet again, of the truly unimaginable misery, destruction and waste that is the consequence of war. (You might ask why, in the midst of the Iraq war and a booming market in violent video games, any American would need to be reminded about anything regarding war. If you did, it would be an excellent question!)

True, I never served in the military. And yet, as the son of a former American officer honorably discharged with a 30 percent (psychological) disability, I can speak to the suffering imposed upon my mother, sister and myself by a human howitzer unable to cope with -- or even acknowledge -- an unbelievably volatile and violent temper. Dad was the glass of nitro in the kitchen cabinet.

There are many victims of wars long past. Think of the farmers and children unfortunate enough to step on lost or forgotten landmines in SE Asia, for example. That's how we lived. Lacerating explosions almost always followed any imagined slight or failure by a family member to adhere to unvoiced and utterly intractable rules.

I can only too easily imagine how fathers like mine, moving backward in time, have suffered and inflicted suffering on untold generations.

War, it seems at first glance, is consequence of human arrogance, ignorance and stupidity or any permutation thereof. Surely, I tell myself, war can only be a necessity when human beings have failed themselves, their God and their own self-interest.

Oh certainly, I respond, war is the result of a lack of imagination.

I and me then agree, war is -- certainly aggressive war is -- utterly criminal and contemptible.

How is it that we continue to accept our lives -- and deaths -- in a completely predictable, utterly repetitive cycle of mass violence that that is inevitably self-destructive and poisonous to our planet?

How is it, I wonder, that the generation of human beings who experienced World War One would rush to martyrdom, again, in a World War Two?

Considering that perhaps 100, 000, 000 million people died as a result of World War Two between, say 1936 and 1945, why did humans rush to battle yet again in places like Korea and Vietnam within less than 20 years, to name two conflicts involving Americans? And how is it that the more destructive war has become, the faster our population - seen as a whole - has grown?

I am certainly not smarter than anyone of the billions who have undoubtedly noticed this situation before. And I have no sure answers to offer nor any certain solution I would impose, if I could.

Nonetheless, I am left with the following hypothesis... For human beings, violence is a self-replicating disease. Our inability to resist military violence (i.e., war) for any length of time whatever -- regardless of our situation and experience -- is suggestive of an addiction. And addiction, I believe, is considered a medical condition by the American Medical Association.

Whether such a hypothesis is testable, I do not know. Nor am I clear on how any of us can go about treating this disease, if indeed my hypothesis were to be accepted.

I am of the firm belief that humanity’s patently aggressive nature need not prevent us from resolving to cure ourselves of war. There are alternatives. We must only be courageous enough to accept them.

The treatment cannot be worse than the disease.
Posted by E. Nation at 10:55 AM 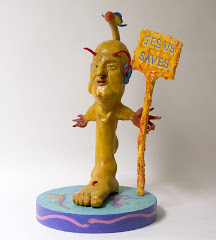